We care a lot.

How this advocacy blog came to be

On 9 September 2010, Kenny Bentley and Michiel de Jong decided to take a few months off their day jobs in order to develop a proof-of-concept for a web architecture in which servers are nothing more than interchangeable commodity infrastructure. Later that year they published a proof-of-concept that involved end-to-end encryption and cross-origin resource sharing.

During 2011, more people joined the project including Javi, Jan, Azul and many others. A crowd-funding campaign raised 5000 euros and was followed by donations from nlnet, Wau Holland Stiftung, DuckDuckGo and others. Around 400 web technology enthusiasts joined the mailing list and led the way from this early proof-of-concept to what is now the remoteStorage spec, curated by the W3C community group that was set up for that purpose, and the RemoteStorageJs javascript library, now maintained by nilclass.

As the initial idea matures into its own 'thing' under the name remoteStorage, we recognized we could make this website into an advocacy blog about unhosted web apps in general. That's why you now find information here about not only the remoteStorage standard and the remoteStorageJs library, but also on other topics that will be relevant for you when you move your web app into the browser. See also our first-year report.

Free technology for the people

Technology is often developed by commercial companies, with the goal of getting rich. But that same technology then often becomes important in the everyday life of many people. When this happens, a sub-optimal situation arises where users of the technology are being used to serve the stockholders of the commercial company.

Free technology solves this problem, as it assigns the ownership of the technology to the public domain. This means everybody can use it, and nobody has power over it. Examples of free technology are Linux and Firefox, and the web. Now that people want apps that run on their desktop, laptop, tablet and smartphone devices, unhosted web apps are the open alternative to proprietary app platforms like Apple, Facebook and Flash.

Also, there is an important difference between hosted web apps and unhosted ones. A hosted web app uses free technology (the web) to offer software as a service. This means users need to upload their user data into the application. Once the user's data is on the service provider's servers, the service provider has undue power over the user, which is why hosted software and the client-server model of websites like GoogleDocs and Facebook, are a potentially very evil architecture from a user perspective. Unhosted web apps are the solution to this problem, as they don't even have a server-side part, so they leave the user in total control of their data.

What we aim to do

A lot of people are not aware yet of the power of unhosted web apps. Most web developers still think in a very strict client-server world view. Our aim is to change that by giving good examples and developing good tools.

Specifically, we think the web would be a better place if every user had their own remoteStorage account, and we will advocate the adoption of this standard both in unhosted web apps and by storage providers.

But there are also a lot of other technologies that are exciting and promising. We aim to use this website to blog about such technologies, and we're even considering whether we could pull off a podcast about unhosted web apps, and maybe we want to run a "free app store" for unhosted web apps on here, so stay tuned!

By accident we discovered that there is a village called Unhošť in central Bohemia. We decided to go visit it on the project's first birthday: 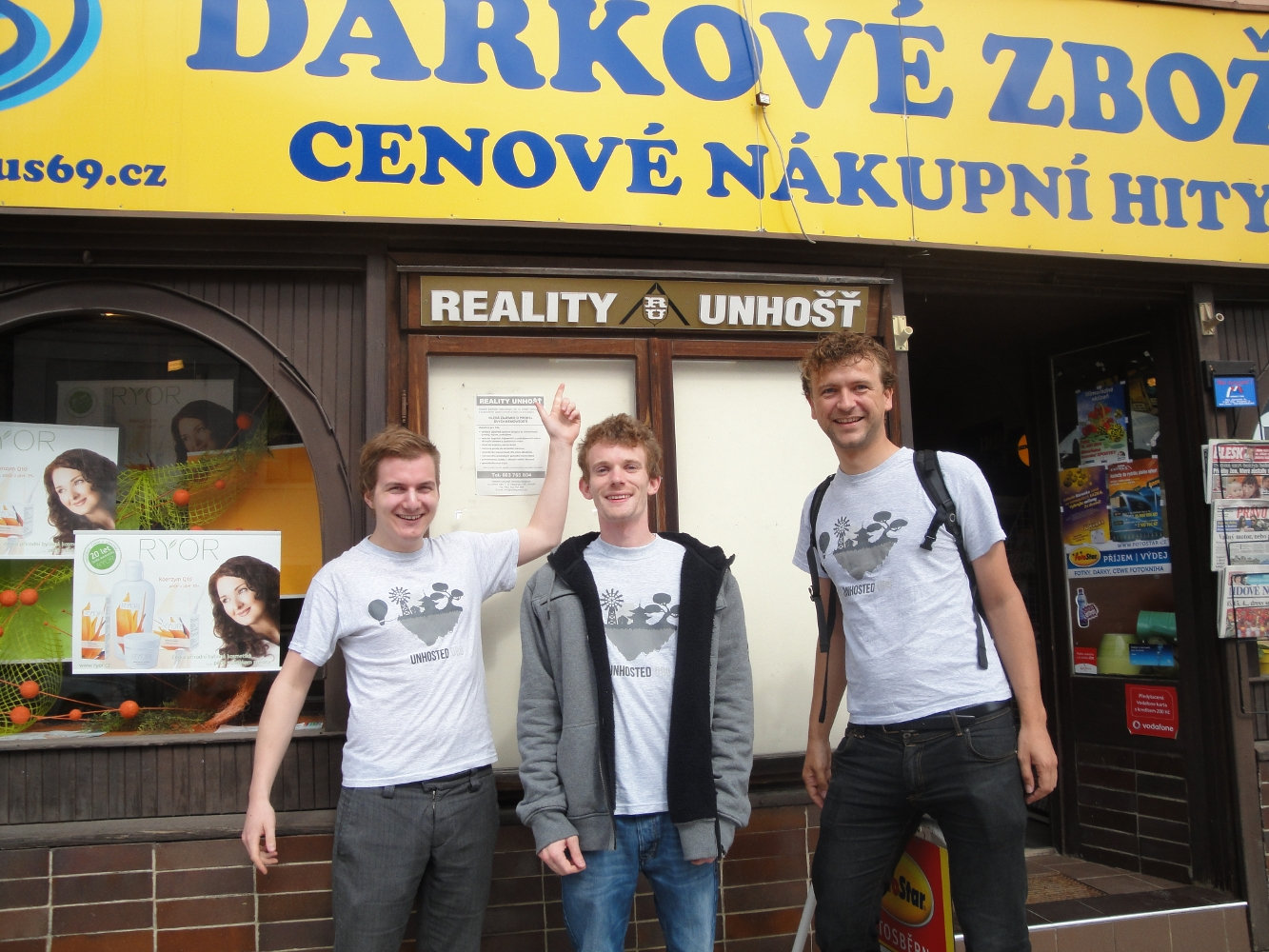 This year we are going back and we decided to unorganize The Unhosted Unconference during the weekend of the second birthday of this website, starting Friday evening 7 September, until Sunday evening 9 September.

What happens during the Unhosted Unconference depends entirely on the people who show up in the village, but we predict there will be a large amounts of unhosted web apps, hacking, discussions, ClubMate, and beer.